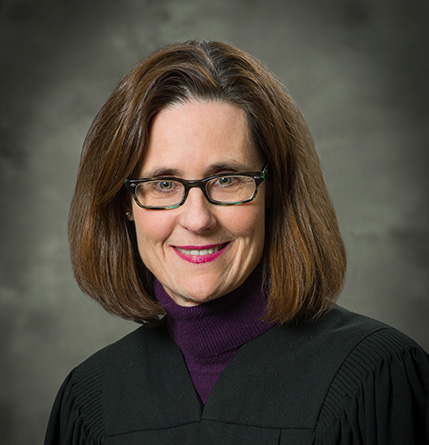 Hon. Erin M. Peradotto is a Phi Beta Kappa graduate of the State University of New York at Buffalo, where she earned her Bachelor of Arts degree, magna cum laude, in 1981 and her Juris Doctor degree in 1984. For nearly two decades before her election to the State Supreme Court in 2003, Justice Peradotto practiced as a trial attorney in the Supreme Courts throughout the Eighth Judicial District, and in other parts of the State, and handled appeals before the Appellate Division, Fourth Department and the New York State Court of Appeals. She was designated to the Appellate Division, Fourth Department by Governor Pataki on December 22, 2006. From 1997-1998, Justice Peradotto served as the Assistant Attorney General in Charge of the Buffalo Regional Office of the New York State Attorney General’s Office.

She received the Outstanding Jurist Award from the Bar Association of Erie County in 2020; was honored by the Buffalo Law Review for distinguished service and contributions to the Law School and the legal community in 2018; received the Lamplighter Award for achievement, leadership, commitment and service to the legal profession, women in the law and the community from the 8th Judicial District Gender and Racial Fairness Committee in 2013; received the M. Dolores Denman Lady Justice Award for lifetime achievement from the Women’s Bar Association of the State of New York, Western New York Chapter in 2011; and received the Distinguished Alumna award from the SUNY at Buffalo Law Alumni Association for her “conscientious and diligent performance in the judiciary” in 2010.