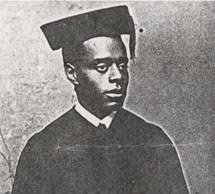 Hon. Gerald J. Whalen, Presiding Justice of the Appellate Division, Fourth Department, has announced that the Court has scheduled a special and historic posthumous admission ceremony for William Herbert Johnson, the first graduate of African descent from the Syracuse University College of Law.  The ceremony will be held on Friday, October 18th, 2019 at 10:00 a.m. in the S.F. Hancock Ceremonial Courtroom at the Onondaga County Courthouse in Syracuse.

Born in Syracuse in 1875, William Herbert Johnson received his undergraduate degree from Boston University, served in the Army in the Spanish-American war of 1898, and then returned to his hometown and enrolled in law school at the Syracuse University College of Law.  After his graduation from law school in 1903, Mr. Johnson was unable to gain admission to the New York bar.  Notwithstanding the fact that he was not admitted to practice law, Mr. Johnson became a pillar of the Syracuse community, hosting such luminaries as Harriet Tubman and George Washington Carver, and opened doors of opportunities for others in the African-American community that had been denied to him.  Mr. Johnson died in 1965 at the age of 90.  Despite the fact that Mr. Johnson was not a lawyer, the minority bar association of Central New York was thereafter named the William Herbert Johnson Bar Association in his honor, and an award in his name is given annually by the College of Law.

In announcing the special admission ceremony, Presiding Justice Whalen said that "more than 116 years after William Herbert Johnson graduated from the Syracuse University College of Law, the admission of Mr. Johnson on October 18 will correct a historic wrong, and provide Mr. Johnson’s family with an official acknowledgment that Mr. Johnson, who was a central figure in the African-American community in Syracuse for decades, had the moral character and intellectual fitness to practice law in this State, and should have been admitted over a century ago.  While in this case the just result may have been delayed, justice was not, in the end, denied.  The Fourth Department is proud to be a part of this historic occasion."

Speakers at the bar admission ceremony will include representatives of the William H. Johnson Bar Association, the Syracuse University College of Law, the Syracuse Black Law Alumni Collective, the Johnson family, and the City of Syracuse, along with Presiding Justice Whalen and Hon. Shirley Troutman, Associate Justice of the Appellate Division, Fourth Department and Co-Chair of the Franklin H. Williams Judicial Commission on Minorities. Notice to Candidates for Spring 2022 Admission to the Bar

Notice to Candidates for Spring 2021 Admission to the Bar

Joint Statement from the Presiding Justices Regarding the Bar Admission Questionnaire